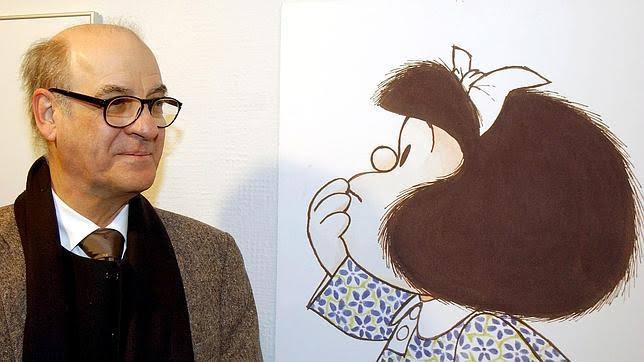 Argentina is mourning the death of Joaquin Lavado, known by his pen name Quino, whose comic character Mafalda, an Argentinian girl with strong political views gained him a lot of admirers throughout the world. He was 88.

Thursday, October 1 was set aside to mourn the beloved artist’s death and flags of public buildings were waved at half-staff, and people were sending messages of goodbye on social media. There is also going to be a small, private funeral for him.

Other personalities who paid tribute to Quino were singer Ricky Martin, basketball player Manu Ginobili as well as many artists and politicians.

Quino was able to dish out harsh criticism on politics through Mafalda’s innocent conversations, and has also spoken about the dictatorships that was rampant in Latin America during the 1960s. Quino himself has seen his fair share of military rule. Flowers and messages of gratitude was received around the world for the creator of a comic that advocated for a better world, and always questioned abuse of power and was a torch bearer for human rights.

Colombian writer Ricardo Silva Romero wrote on Twitter, “Few things are as sad as the fact that Quino is gone.”

“Goodbye, teacher,” wrote Argentinian graphic comic Juan Martín “Tute” Loiseau in a strip in local newspaper La Nación. Tute also spoke separately on a local TV channel, saying, “He was a philosopher of humour and, at the same time, a 10-year-old boy. As with geniuses, they always keep talking to us, he continues to challenge us.

Quino’s niece told newspapers that he will be cremated in his hometown of Mendoza in an intimate ceremony.

Kris Jenner’s ex bodyguard accused her of sexually harassing him in a recent lawsuit! Check for more updates.
Did Jeffree Star’s New Boyfriend actually rob him and is now ignoring his calls? Here is what we know!