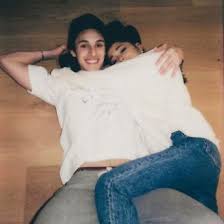 Grande recently surprised her fans with an amazing news. She announced that she is engaged to her boyfriend Dalton Gomez. She also spread joy to patients near her home in Los Angeles. The great news was revealed by UCLA Mattel Children’s hospital. The photos and happiness of ill youngsters is really hear warming. Literally, nothing can be more wholesome than this.

UCLA hospital also added that the beautiful couple has sent their elves to spread joy and happiness in the hospitals.

.@ArianaGrande and Dalton Gomez sent their elves to spread some holiday cheer to our kids and their families.

Thank you, Ariana, Dalton and all of our supporters for your continued support this holiday season.

Ariana and Dalton went public with their relationship in May.

Grande was all flaunting her engagement ring in the picture. 2020 has been very blissful and grateful for Ariana. She was also praised for her recent album called “Positions”. The album’s song also went to the top in Billboard hot 100.

On 20th of December, she confirmed the rumor of her relationship with Dalton.  According to “People” the couple started dating in January 2020. Dalton is successful real estate agent. They were hanging out before it for couple of months. SAs per the sources it is clear that Dalton is not at all a part of entertainment industry. He is only known for his knowledge in the fields of architecture and luxury estates.

Above all, we wish good luck to the cutest couple.