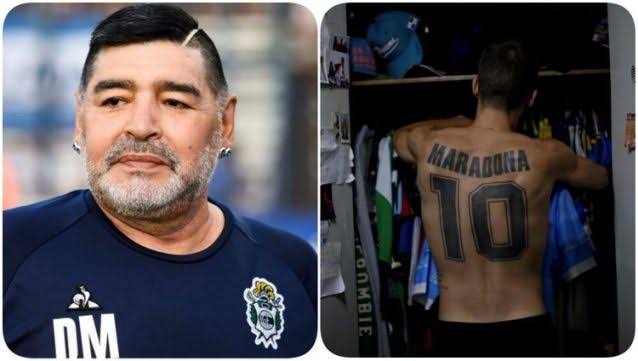 Rodriguez says it’s something beautiful to live with him, and for them, he did not die, and that the love they have for him is eternal. Rodriguez’s pizza shop is called “Siempre al 10” depicting Maradona’s jersey number, which in itself is iconic.

Maradona has a massive following which seemed to have grown following his death. His fantastic gameplay has earned him the nickname “el dios”, which means God. Argentina has declared many days to be for national mourning and his body is still at the presidential palace.

Cinitia Veronica says that she felt the pain a woman feels during childbirth when Maradona died. She also displayed his tattoos on her arm, at her Buenos Aires home. She also said that having him as a tattoo makes her feel that he’s alive.

Yet another fan Maximiliano Fernando went to a tattoo parlour following Maradona’s death and got tattoos on his arm, which were images of Maradona mid-stride, and of him holding the World Cup. Fernando believes that having his tattoos is the greatest thing there is. Fernando’s bedroom walls are packed with pictures and shirts of the legend.

Maradona won the World Cup for Argentina in 1986 and became a sensation for Napoli, instantly becoming the representative for the poorer sections of Italy’s south side. His giant murals are still present in the city.

Shawn Mendes Is Not Holding Back And Revealing All The Never Heard Before Details About His Relationship With Camila Cabello !
The mystery around Diego Maradona’s death intensifies as his doctor accused for the footballer’s death