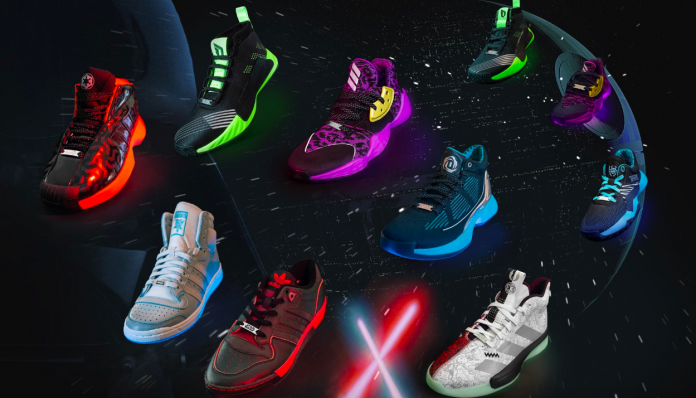 Adidas this Thursday launched its Space Battle sneakers in the collaboration with Lucasfilm.

The shoes are based on the theme of Star Wars, inspired by its characters, including starships, lightsabres, and Star Wars classic characters.

The Lightsaber themed shoes are available from November 1 on the Adidas website and selected Adidas stores, on the price range of $70-$100.

To make the Lightsaber theme a full-pack, crewnecks, hoodies and sweatpants were also available on the stores, inspired by it.

The space battle pack launched on Thursday, while the characters pack will launch on November 29.

The look of the shoes

Ultraboost 19 is grey and blue metalized shoes. It is quoted with “Never tell me the odds” and “Jump to the lightspeed“.

Ultraboost S&L features a grey and orange ship’s ordnance. It also glows in the dark. It is quoted with “Stay on target” and “The force will be with you“.

Alphaedge 4D is inspired by a death star. It is quoted with “That’s no moon” and “The power of the dark side“.

The launch is done to promote Star Wars’ upcoming film The Rise Of Skywalker. The movie is directed by J.J Abrams, in which Daisy Ridley, John Boyega, along with Mark Hamill and Carrie Fisher will be seen.

The movie will hit the theatres on December 20.

Previous article
After 26 years, Harrison Ford, 77 decides to return to TV with his new series “The Staircase.”
Next article
Mainframe Catastrophe for Chicago Bears!!!