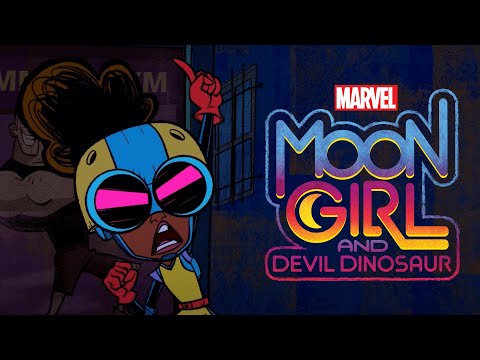 Moon Girl and Devil Dinosaur: The next big thing in animation

The Marvel’s Moon Girl and Devil Dinosaur, based on the popular Marvel comic books, follows the exploits of 13-year-old super-genius Lunella Lafayette and her 10-ton T-Rex, Devil Dinosaur, which she unintentionally drags into the present-day New York City.

Seeking help from Casey, her closest friend, her family, and Devil’s fierce loyalty and strength, Lunella decides to change the world and defend her Lower East Side neighbourhood.

Moon Girl and Devil Dinosaur from Marvel has already been renewed for Season 2. The animated series’ second season has already been ordered by Disney Branded Television in advance of its debut.

The news was presented on Saturday, October 8 at New York Comic Con, along with a teaser of the theme music composed and produced by Raphael Saadiq.

Given that the first season of the eagerly anticipated animated series doesn’t air until February 10th on Disney Channel and follows soon after on Disney+, the Season 2 renewal is remarkable. As an added bonus, the main title sequence of the show, which features the theme song written and produced by three-time Grammy Award winner Raphael Saadiq, who serves as the series’ Executive Music Producer, was also revealed.

Moon Girl and Devil Dinosaur is produced by Disney Television Animation, with Fishburne and Helen Sugland’s Cinema Gypsy Productions and Steve Loter serving as executive producers. Rodney Clouden, Pilar Flynn, and Kate Kondell are the co-executive producers of season two. Halima Lucas is a co-producer and a story editor.

Also read: LEGION OF SUPERHEROES’ VOICE CAST GETS BIGGER WITH THE ADDITION OF MEG DONNELLY AND HARRY SHUM JR.